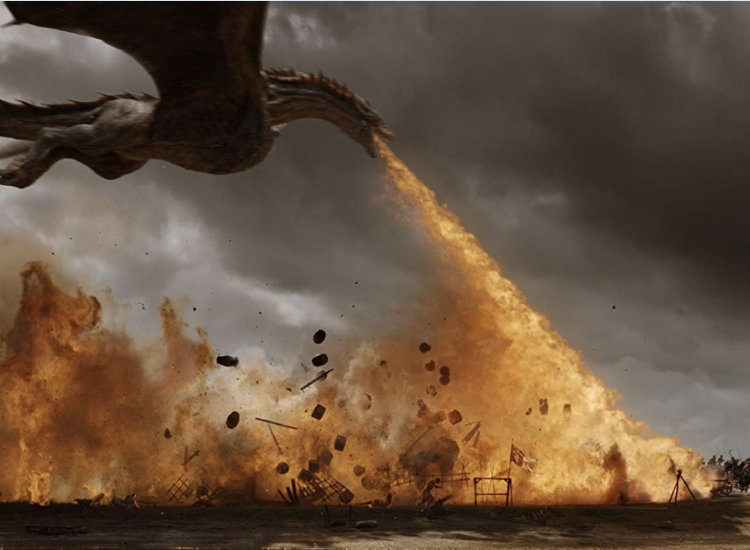 It is very little in Game of Thrones that can be attributed to any known science. How Melisandre has demon shadow babies that suck the life of the man who sires them, or how a wall of ice stands at the border between a perfectly green forest and a barren, frozen wasteland without melting remain to be the most glaring examples that The Song of Ice and Fire series is fantasy and nothing more.

There is, however, one thing in Game of Thrones that can be vaguely explained away with science! And yes, I’m not particularly ashamed that I spent a Saturday morning texting my physicist friend trying to figure this out. Through this discussion, it turns out the way seasons work in Game of Thrones, meaning that they last for long periods of time, is somewhat explicable.

But before we get into that, a refresher for how seasons work:

So, then, how is it possible that the world of Game of Thrones can have a season for so long, and have it be uniform across the planet?

Theory #1: The Games of Thrones (GOT) Planet Has No Tilt

If a planet exhibits no tilt, it will consistently have the same season. This means their summer would never end, so I hope the kids of Westeros are ready for non-stop explosion-filled cinema excitement and no school. Forever.

Of course, there is a big problem with this theory. Tell them, Ned Stark.

Oh yeah. Right. Winter is coming… which means there are seasons, so unless some other celestial body is significantly changing the GOT planet’s orbit every few years, the theory seems pretty untenable. But what of the Red Comet in the first book which appears as the summer slowly changes to winter? you ask. Well, comets aren’t usually dense enough or close enough to significantly change a planet’s orbit or the axis of the Earth’s rotation.

Of course, if it is the case that the Red Comet changes the GOT planet’s orbit or axis of rotation, then you have to wonder if this is a common event on the GOT planet. If that were the case, you’d have to assume that the gravitational pull from the Red Comet would wreak havoc on the coastal areas, which then, in turn, means sayonara to King’s Landing and the Greyjoys. Thus, from this and a myriad of other unstated rationales, I can reasonably assume that this theory (my original theory, it should be noted) is crap.

Let’s move on to the next one.

Theory #2: The GOT Planet Has a REALLY Long Orbit

This theory is more workable, though only marginally and the crux of it lies in that if winters last years, and summers last years, then maybe the GOT planet does have a tilt and it has a very, very long trip around its sun.

Problems with this theory lie both in semantics, and in science. But first, since it is my forte, semantics.

The people of the GOT planet wouldn’t measure years the same way we do if their year isn’t the amount of time it takes to go around the sun. And while I’m on that point, I would surely like to know how they know what a year is if they don’t have a standard four-season year to base it off of, but that’s a question for another, pedantic article.

Secondly, and more science problem-y, the books state very clearly that the summers and winters don’t last for a consistent amount of time. At the beginning of Game of Thrones, it’s mentioned that the summer they were currently enjoying was uncommonly long. Orbits, however, are generally consistent… so there goes that theory.

Theory #3: The GOT Planet Orbits a Variable Star

And so we come to the most practical theory for the Game of Thrones planet.

Firstly, for this to work, we do need a planet that exhibits no tilt. So, theory #1 can have its day(s) in the sun here.

Unfortunately, most historical precedent for stars with variable luminosity is derived from Cepheid Variables, and I say unfortunately because their extended period of heightened luminosity reaches to months at best; not years. But that’s okay because there are Long Period Variable stars, and even better, there is a subset of stars within them called Slow Irregular Variables and they are unpredictable! So essentially, the GOT planet is orbiting a star that has a varied solar intensity which would account for the length of seasons despite the planet’s orbit.

I should probably add the disclaimer here, however, that the solar intensity of these variabilities may or may not be able to drive seasonal changes, though there seems to be very little reason not to think this possible given the correct circumstances.

These sorts of variable stars, though, tend to be red giants, which are on the cooler end of the star scale, and most definitely on their last legs. So, in a metaphor that I’m sure George R.R. Martin didn’t really intend to mean, the GOT planet is orbiting a dying star.

Now, while we have seasons sort of sorted, trying to explain everything else that happens in the Game of Thrones world is going to be a lot more difficult. Like, just how does one genetically gain the ability to withstand fire?