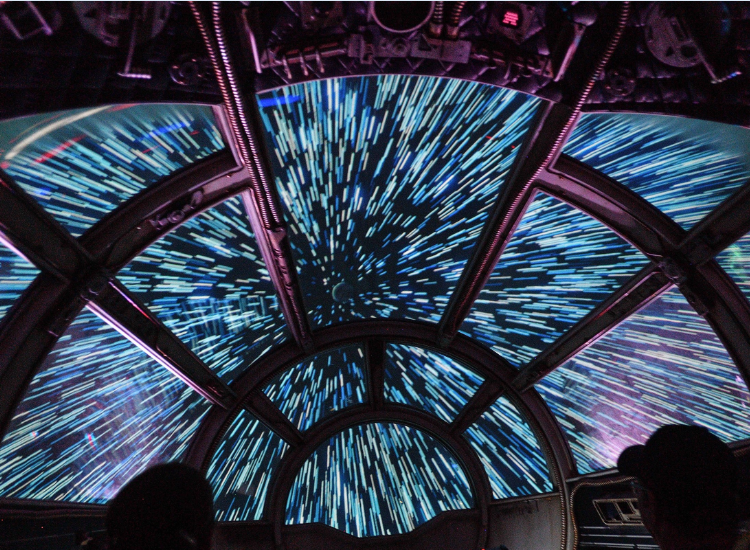 Despite the hubbub – the journalists jostling for that final refill of wine, the smoke, the noise, and confusion – I couldn’t help noticing how Professor Randall kept stroking the explosives pack strapped to her astonishing piece of equipment.

It was a balmy evening here at CERN, scene for one of the most momentous press conferences ever. They had decided to hold it on the Press Center Balcony, overlooking Lake Geneva. The final rays of the setting sun cast a pale fire upon the mountain tops, while in the deep indigo sky the first stars were coming into view.

‘Ladies and Gentlemen of the press,’ Professor Randall began, ‘tonight you will see the most astonishing confirmation of superluminal communication, a journey which began with the discovery of neutrinos traveling faster than light here at CERN back in 2011. Over the years we have improved the equipment and I can announce today that we have achieved practically instantaneous communication over interplanetary distances.’

There was a subdued gasp from the crowd as she pointed to the device on the table beside her.

‘We decided to call this instantaneous communicator an Ansible, after similar devices described in science fiction. There’s one here, and another on a NASA fusion-powered rocket boosting away from us even as I speak. It’s currently passing the planet Jupiter, traveling at approximately 10% of the speed of light.”

I was still fixated on the detonation charge and in this I was not alone – a nervous hack from The Times shot his hand in the air.

‘Excuse me, Professor. Would I be right in thinking that you’ve got some explosives there on the desk beside you? What’s all that about?’

The room visibly hushed – this had obviously been news to some here. Randall cleared her throat and pointed to a diagram which now appeared on the screen behind her while appearing to avoid or ignore the question.

See the vertical axis on this graph? That’s us, here at CERN. And that diagonal line? That’s the NASA rocket currently powering out beyond Jupiter. Now, at 11.05 pm – about ten minutes time – the Ansible here will send a signal using coded neutrinos out to that rocket. It will, of course, be received there practically instantaneously. The Ansible on board will then re-transmit the signal back to the Ansible here in this room. It will act almost like a mirror.”

There was murmuring in the room. Journalists don’t like being played for fools and this seemed a pointless experiment. Plus she hadn’t answered The Times man’s question. The Professor glared at her audience and the muttering subsided.

‘Because of the rocket’s immense speed away from us,’ she continued, ‘it doesn’t share the same concept of “now” as we do here. In fact, at the moment it receives the Ansible signal from the earth, from the rocket’s point of view it’ll be only 11 pm here. It’s instantaneous retransmitted signal will, therefore, get here at 11 p.m.

‘That’s the line you see on the chart – coming back to earth and arriving at 11.00,’ she added helpfully.

‘That’s assuming Einstein was right!’ declared the man from The Daily Sport.

‘Oh yes, the results of special relativity are what makes things here at CERN run at all,’ the Professor answered patiently. ‘There’s no doubt about this diagram at all.’

A few of the assembled journalists were now beginning to figure things out.

‘Hang on, you’re sending the signal out at 11.05 pm and getting it back five minutes earlier?’ asked the Herald-Tribune reporter indignantly.

‘It’s even better than that,’ replied the Professor, finally getting back to the original question. ‘You see this explosive charge? It’s quite small, but when it receives the coded neutrino pulse it will detonate. You will come to no harm, it’s tiny really – but it’s enough to wreck the equipment pretty completely.’

A shout from the audience: ‘But if it’s wrecked, it can’t send the signal which is … going to wreck it!’

The Professor smiled again at the now thoroughly-perplexed crowd of journalists. ‘Here at CERN, we like to set the universe the toughest challenges imaginable and see what Nature comes up with. Well, it’s nearly time.’

On the wall, the big clock showed the seconds finally ticking down to 11 p.m. A few of the hacks began to chant:

Overhead, the stars began to wink out.

The recent experiments at CERN purport to show that neutrinos have been observed traveling faster than light. If true, this would constitute a prima facie case of causality violation as described above.

The effect is small: if they had observed an actual race, the neutrinos would have come in 18 meters ahead of the light (a 60 nanoseconds lead). The measurement depends on the extremely accurate correlation of the neutrino-producing proton beam pulses at CERN, and the detected neutrinos 732 km away at Gran Sasso in central Italy. Individual neutrinos were not timed – the announced speed measurement is a result of statistical pulse-matching between what was sent and what was received and here is where imprecision may have crept in.

If the effect is real, however, be prepared for some very exotic physics indeed: imaginary masses, higher dimensional tunneling, causality violation…

At 11.00 there was a random event in the CERN Ansible detonator logic circuit which initiated the small explosion but which also – in a highly improbable way – created a chain of events which led to a neutrino pulse being generated from the Ansible *receiver* in the direction of the rocket ship. This pulse was ‘slow’ FTL.

At 11.05, again by a remarkably improbable sequence of events, the wrecked equipment happened to produce a collimated beam of ‘fast’ FTL neutrinos which was also pointed at the Jovian rocket ship.

A few instants after 11.00 CERN time, the two beams each arrived simultaneously at the rocket: one at its transmitter and one at its receiver, where they were both absorbed.

At a particular time (depending on the rocket’s travel history) the Ansible on the rocket transmitted two FTL neutrino signals at the same time. A ‘fast’ FTL signal emerged from its transmitter and a ‘slow’ FTL signal was rather improbably emitted from its receiver. Both beams were aimed at the CERN Ansible and they arrived there at different times as expected, the ‘fast’ beam arriving first.

Contrary to the story’s conclusion, there is no paradox leading to the end of the universe because we can successfully draw the spacetime diagram as shown. What we call a ‘causality violation’ is here revealed as a gross violation of the rule about entropy increasing – the second law of thermodynamics: wrecked devices shouldn’t be able to send high-powered beams with precision accuracy; receivers receive, they don’t normally transmit. Note also that the observers at CERN and on the rocket ship disagree about the direction the FTL neutrino beams are traveling in!